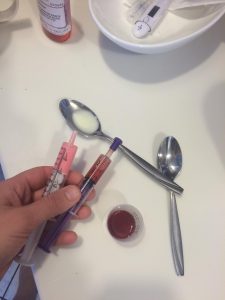 Day four of Maya’s treatment was way back in mid February. The cocktail on that day included an infusion of a drug based on an enzyme called asparaginase and linked to polyethylene glycol which allows the drug to stay in the body longer. At that point in time there was passing mention of this drug being ‘notorious’ for causing serious allergic reactions; no need to worry, though, since the body won’t react until the second infusion, and that would be more than a few months down the road.

More than a few months have passed, and we’ve just completed day four of Delayed Intensification (DI) which included the reintroduction of PEG-asparaginase.  As if there wasn’t enough to worry about during DI, today’s infusion was handled with extreme care: slow infusion over two hours followed by two more hours of close observation, Benadryl 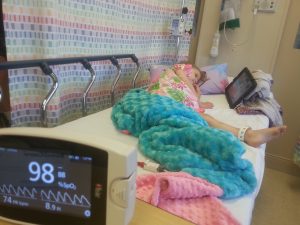 and Epi-Pen at the ready. For the first hour I stared at the pulse-ox screen watching Maya’s oxygen saturation tick down to 97 then back up to 98… over and over. Maya relaxed on top of her mermaid blanket and watched Monsters Inc.

There are at least a few times over the past few months when I distinctly remember white-knuckling it through this crazy ride. Sara and I communicate and try to help manage stress as a team, but there are times when we both just have to grit teeth and wait it out. At some point today I realized this is exactly the third time in Maya’s life I’ve spent an hour or more staring at an oxygen saturation reading and willing it upward: (1) at birth Maya aspirated fluid and spent time under an oxygen hood as her breathing stabilized; (2) after her port placement in Oakland she recovered slowly, and I watched her reading periodically dip low enough to set off threshold alarms; (3) and today I stared and stressed, gripped by a familiar feeling, and was so thankful as her reading never went below 96… perfectly normal the whole time–why the troubled look, Daddy?

We’re told the most severe reactions tend to show up during or just following the infusion. After that we need to watch carefully for rash, difficult breathing, or fever.

Maya is handling things as well as a three year old jacked up on steroids can be. She waited patiently through the four hour clinic visit, she ate spaghetti and watched movies, and other than a few minutes of roid-meltdown, she was sweet, agreeable, calm and strong.

A BIG THANK YOU to the nurses and staff at the children’s infusion clinic–Denise, Mary, Brittany, Ty, Lucy, you create an environment that allows our little dragon to soar and her parents to not keel over from stress. The strength and grace you bring with you each day and into each heart wrenching challenge is uncommon, awesome, a gift.